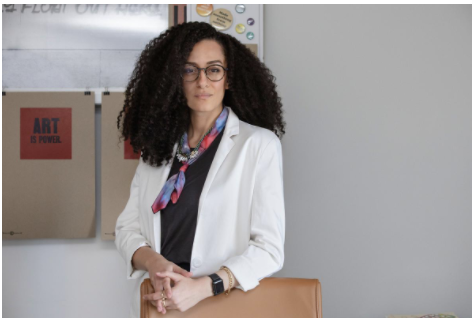 12:00 pm – 2:00 pm EDT/GMT-4
Online Event
Each semester CCS Bard hosts a program of lectures by leading artists, curators, art historians, and critics, situating the school and museum’s concerns within the larger context of contemporary art production and discourse. Lectures are open to students and faculty, as well as to the general public, and will also be documented through video and/or audio recordings, which will reside in the CCS Bard Library and Archives. All talks are free and open to the public - registration is required in advance.

Deana Haggag is the President & CEO of United States Artists, a national arts funding organization based in Chicago, IL. Before joining USA in February 2017, she was the Executive Director of The Contemporary, a nomadic and non-collecting art museum in Baltimore, MD, for four years. In addition to her leadership roles, Deana lectures extensively, consults on various art initiatives, contributes to cultural publications, and has taught at institutions such as Johns Hopkins University and Towson University. She is on the Board of Trustees of the Detroit Institute of Arts and The Underground Museum, as well as the Artistic Director’s Council of Prospect.5 and Advisory Council of Recess. She received her MFA in Curatorial Practice from the Maryland Institute College of Art and a BA from Rutgers University in Art History and Philosophy. She currently lives in Brooklyn, New York.
For more information, call 845-758-6822, e-mail ccs@bard.edu, or visit https://www.eventbrite.com/e/speaker-series-deana-haggag-tickets-135998275503