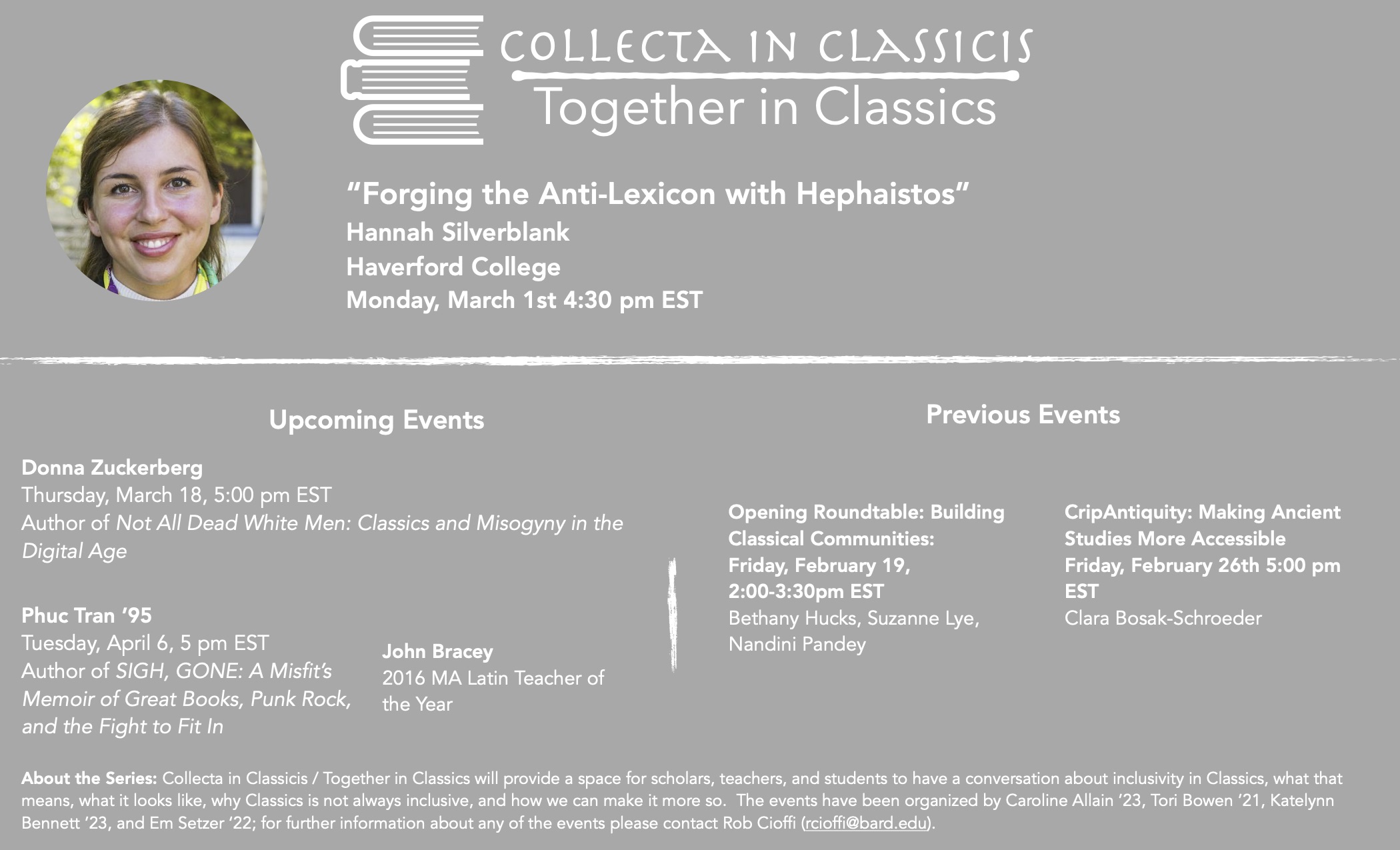 Forging the Anti-Lexicon with Hephaistos

In both ancient Greek and English, the language of disability is notoriously fraught with ideological assumptions about the wide variety of human bodies, minds, and ways of being. In the first half of this talk, Hannah Silverblank (Haverford College) will discuss the generative example of a Homeric adjective used to describe the god Hephaistos: the epithet ἀμφιγυήεις (amphi-gu-ē-eis). Does the word really mean ‘with both feet crooked, lame’, as the standard Greek-English lexicon (LSJ) would indicate? What are readers to make of the inconsistency that translators have brought this word into English, from ‘of the two lame legs’ (Murray 1924), to ‘strong-handed’ (Lattimore 1951) to ‘the… crook-legged god’ (Alexander 2015)? How do English translations of Homer’s Iliad grapple with the uncertainty of the word’s meaning, and, by extension, the meaning of Hephaistos’ embodiment? Together we will discuss the ways in which ableist assumptions of lexicographers and translators have coded and distorted Greek representations of the smith god and his disability, with ideological consequences that spill out beyond the lexicon and the Iliad.

The second half of the talk will take the form of a speculative dialogue between the speaker and the audience. How do we think about the role of the dictionary in our Classical Studies courses? How might students and faculty search for meaning in ancient languages through and beyond the lexicon? What forms of experiential and linguistic knowledges are assumed or privileged in our Greek-English lexica, and which are repressed or excluded? How does the epistemological potential of the lexicon inform and shape the kinds of meaning and interpretation derived from studies of the ancient Mediterranean? How can we — together, or collecta, in Classics — collaborate to forge new, sharper tools of wordsmithy?

Collecta in Classicis : “Together in Classics,” will provide a space for scholars, teachers, and students to have a conversation about inclusivity in Classics, what that means, what it looks like, and why Classics is not always inclusive. We welcome scholars who have engaged critically with diversity of race, ethnicity, gender, sexuality, physical ability, and more as it relates to their experience in the field of Classics, or in their study of the Classical World, or both. Furthermore, we hope to include voices of marginalized groups typically silenced either in the past, or even today, by the Classics. How we make Classics more inclusive and accessible, and what that means and looks like, are difficult questions. We hope to encourage productive dialogues that contribute, in individual steps, to the transformative work needed in order for the field of Classics to be reimagined.

*A note on the name: The Latin title is representative of Classics, and having the words declined in the neuter, accusative, plural is representative of the inclusivity. The neuter excludes neither men nor women, while also including people identifying outside of masculine or feminine binaries. The plural is—quite literally—denoting that Classics is for and made up of all people.