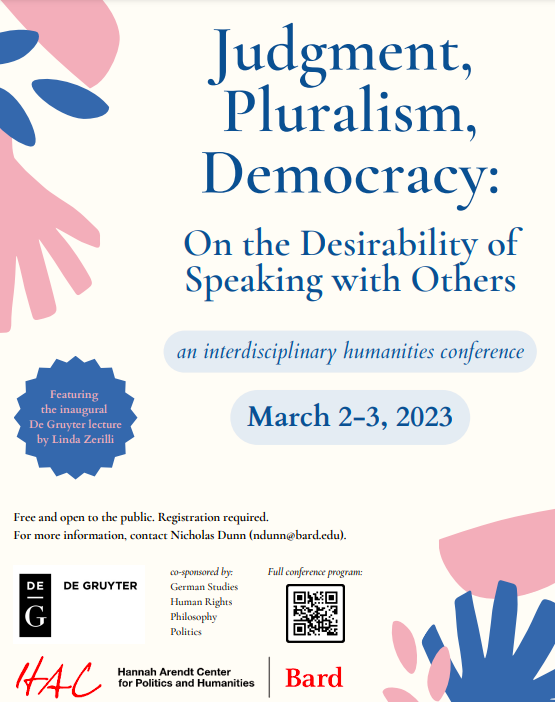 Multiple Locations (See below)
On the Desirability of Speaking with Others

Free and Open to the Public!

Keynote by Linda Zerilli (The University of Chicago):

"Arendt and the Problem of Democratic Persuasion"

One of the latest features of the crisis of democratic culture is the problematization of free speech. The dysfunction of public discourse in democratic societies has sparked skepticism about the validity of the principle itself and concerns about its evident impracticability. This line of interrogation has targeted the grounds and scope of this putatively desirable freedom. For example, does Louis Brandeis’s idea that with “more speech…the truth will out” have any actual empirical validity? Or does the weaponizability of free speech in the age of the internet not call for modifying or restricting its legal protection?

This conference aims to expand the parameters of the current conversation by taking a step back from the desirability of unrestricted ‘freedom’ of expression and shifting critical attention to the desirability of ‘talking to others.’ For any case to be made in support or against free speech is, more fundamentally, a statement about whether the good of talking to others demands the protections that make it possible, be that demand conceived in moral, instrumental, or prudential terms.
We will launch the conversation by foregrounding the contributions of two figures who have explicitly and substantively defended the necessity of speaking to others who differ from and with us: Immanuel Kant, who first elaborated philosophical grounds for the idea, and Hannah Arendt, who critically revived the Kantian framework in the middle of the 20th century—at a historical juncture where she considered the defense of pluralism to be at risk. In his Critique of Judgment (1790), Kant famously puts forward the maxim to “think in the position of everybody else,” and characterizes judgments of taste as requiring that one “reflect on [their] own judgment from a universal standpoint” which entails “putting [one]self into the standpoint of others.” In fact, Kant further warns in his Anthropology (1798) of the dangers of “isolating ourselves with our own understanding and judging publicly with our private representations.” In her well-known Kant Lectures (Fall 1970), Arendt draws out the implications of Kant’s claim that to “restrain our understanding by the understanding of others” is, in fact, a “subjectively necessary touchstone of the correctness of our judgments generally.” Building on this, Arendt puts forward the related notions of ‘representative thinking’ and ‘enlarged mentality,’ which involve not only the idea that it is good to think from the standpoint of others and take their thoughts into account, but that “thinking...depends on others to be possible at all.” Whatever her differences with Kant, Arendt is to be credited for highlighting the radical force of Kant’s “belie[f] that the very faculty of thinking depends on its public use” because it was “not made ‘to isolate itself but to get into community with others’.”

The aim of this conference is to curate an interdisciplinary conversation between scholars in the humanities and humanistic social sciences who are interested in critically exploring historical or theoretical accounts of the practice of talking to others in philosophy, political science, cultural studies, history, linguistics, or any related humanistic discipline.

All participants and attendees must register, which includes uploading proof of covid vaccination. The event will take place in-person and will be free and open to the public.

We anticipate that this event will eventually lead to an edited volume on the conference theme. Speakers will have the opportunity to submit their full papers for consideration.