Judge Again Rules in Favor of Voting at Bard 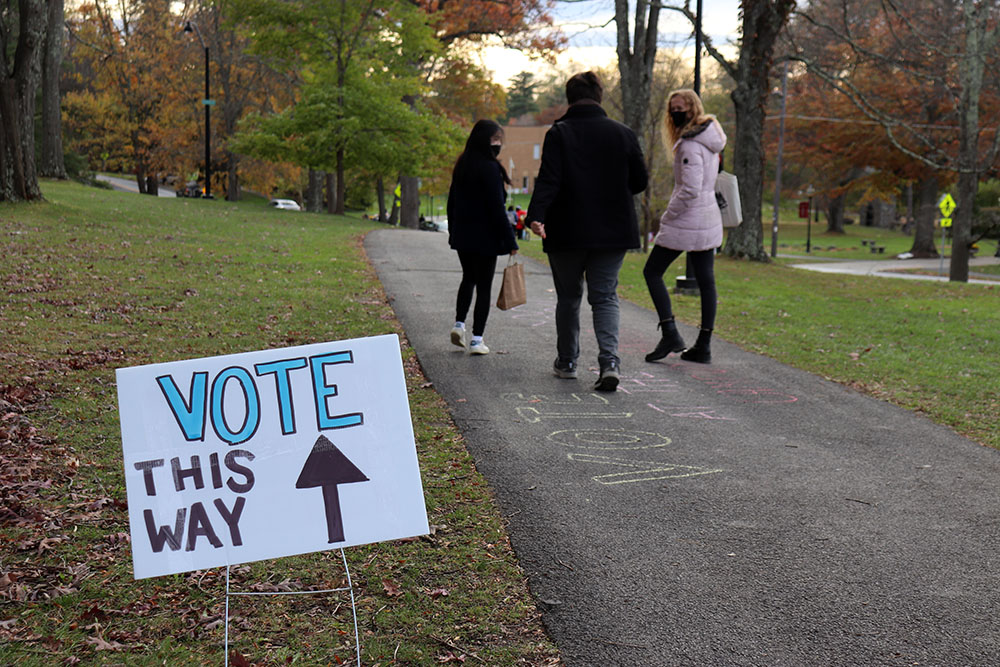 Dutchess County Supreme Court Judge Maria Rosa sided with Bard College today in ruling that District 5 voting locations will remain at Bard’s Bertelsmann Campus Center and St. John the Evangelist Church in 2021. The ruling upholds the court’s 2020 decision supporting the opening of a Bard campus voting site, dismissing an effort by Republican Election Commissioner Erik Haight to revert to the 2019 location as “arbitrary and capricious.”

“We’re gratified by this reaffirmation of the original decision establishing an accessible voting site at Bard,” said Erin Canaan, Vice President for Civic Engagement who was one of the plaintiffs. “This is a win not just for students, but for all voters in the district, including those with disabilities. We look forward to welcoming all District 5 voters to Bard this fall and for years to come.”

In July, the student-led voting rights initiative [email protected] was joined by students, staff, and the president of the College to file a lawsuit against the Dutchess County Board of Elections after Commissioner Haight and Democratic Election Commissioner Hannah Black failed to agree upon a polling site for the forthcoming 2021 elections by the March 15th deadline. Haight insisted that the site revert exclusively to the 2019 location at St. John’s the Evangelist despite the court’s previous 2020 ruling, the successful voting experience at the Bard site in 2020, and the Town of Red Hook Board’s reaffirmation in February of its prior, unanimously approved resolutions supporting the Campus Center as the District 5 polling site. Haight also blocked attempts to conduct a state-mandated American with Disabilities Act survey at St. John’s, despite extensive documentation that the Board’s 2019 survey was fatally flawed.

“This is the third time in the past decade that Commissioner Haight has lost a lawsuit challenging his attempts to suppress the youth vote and ignore the needs of the disabled. His repeated arbitrary and capricious actions, as determined by state and federal courts, have now cost county taxpayers close to $100,000,” said Executive Vice President Jonathan Becker. “Bard and the petitioners are fully prepared to defend Judge Rosa’s decision in the event of an appeal.”

“Judge Rosa’s decision sends a strong message as we celebrate the 50th anniversary of the Twenty-Sixth Amendment and unprecedented youth voting rates nationally,” said Yael Bromberg, co-counsel for the plaintiffs, a constitutional litigator and Twenty-Sixth Amendment scholar. “While voting rights are being legislated in our nation and state capitols, often overlooked local election administration decisions can decisively impact the youth vote. These efforts are particularly successful when, as here, college administrations like Bard College lead by supporting youth-lead efforts.”

Bard students have resorted to litigation or the threat thereof to fight efforts aimed at limiting their voting rights five times since 2000. The courts ruled in favor of the students in all preceding legal actions. The current lawsuit follows years of advocacy by Bard College students, including Andrew Goodman Student Ambassadors and their peers, for an on-campus polling site.

"Student voters should be able to vote where they study and live,” said Bard student Sarah Seager ‘24, who currently heads Elec[email protected] “This win makes that possible. Having a polling place on campus is essential to providing accessible voting for Bard students. I am thrilled to see this and look forward to seeing Bard students being heard through their vote."

Bard student Sarina Culaj, a plaintiff in the case, said, “I am ecstatic over the news that we have finally won the lawsuit. This is one huge victory that brings us one step forward in fighting against voter suppression.”

The full lawsuit can be read here.

Additional information on the fight for a polling site at Bard can be read here.